From this comparison it is clear that both accounts cannot be literally true. The two accounts are incompossible. Hyers also points out that the two creation narratives appeal to two very different contexts:

Genesis 1 has drawn upon the imagery and concerns of the farmers and city dwellers who inhabited river basins prone to flooding, while Genesis 2 has drawn upon the experiences of shepherds, goat-herders, and camel-drivers who lived on the semiarid fringes of the fertile plains, around and between wells and oases. For the pastoral nomads and desert peoples the fundamental threat to life was dryness and barrenness, whereas for those agricultural and urban peoples in or near flood plains the threat was too much water, and the chaotic possibilities of water. It is also revealing that Genesis 2 does not mention a creation of fish, whereas fish in abundance are prominent in Genesis 1 (fish occupy half of day five, with “swarms of living creatures”). This interpretive approach also helps explain the two versions of creation present in such different – nearly opposite – views of human nature. In Genesis 1 human beings are pictured in the lofty terms of royalty, taking dominion over the earth and subduing it – imagery and values drawn from the very pinnacle of ancient civilizations, which Israel itself achieved in the time of Solomon. In Genesis 2, however, Adam and Eve are pictured as servants of the garden, living in a garden oasis: essentially the gardener and his wife. Thus, while Genesis 1 is comfortable with the values of civilization and the fruits of its many achievements and creations, Genesis 2 offers a humble view of humanity, a reminder of the simple life and values of the shepherds ancestors, before farming, and even before shepherding, in an Edenic state of food gathering and tending. In this manner these two views of human nature are counterbalanced. They are not contradictory but complementary.

In the second creation narrative, the setting focuses on earth and man. In the first narrative, mankind was the climax of creation, but in the second narrative, mankind is the pivot of the story. The accounts begin differently. Where the first account began with the creation of heaven and earth, this one begins with the making of earth and heaven. The first account starts with a watery chaos, whereas the second one starts with a barren landscape. Where the first account speaks of “creating” (bara’) and “God,” the second account speaks of “making” (asah) and “Yahweh.”  The first account uses restrained and dignified language to speak about God, where the second narrative is more homely and familiar in speaking about God. Where the first narrative is from the Priestly source, the second one is from the Yahwist source. The second narrative is also tied to a Mesopotamian tradition, which can also be detected in the loan words for “flow” and “Eden.” The word for “flow” is from the Sumerian a.dé.a and “eden” is from the Akkadian edinu or Sumerian eden. The word is rare in Akkadian, but very common in Sumerian, which points to the original source as being very ancient, going back to the oldest cultural stratum in Mesopotamia. The tree of knowledge also has links to Mesopotamia. 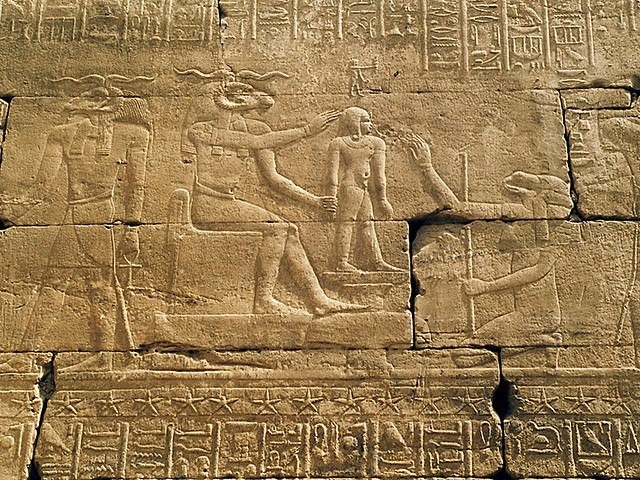 Khnum the potter with Heket assisting.

When looking at Egyptian accounts, the general theme is that man is made from clay. In the Hymn of Khnum, the creator god is depicted as a potter, forming man at the potters’ wheel and life is given to the man by the goddess Hekat breathing life into his nostrils. Khnum is called “God of the potter’s wheel,” who “has fashioned gods and men.” In the Instruction for Merikare, it is said that Re, the sun god (also called Ra), placed the breath of life in man’s nostrils. He “gave the breath of life to their noses.” Kenneth Mathews observes that the Egyptian narratives do not show interest in the creation of woman.

In Mesopotamian myths, humans are made from clay or the blood of a dead god. In the Enūma eliš (full text here), the leader of Tiamat’s armies, the god Kingu, was slain and from his blood Marduk formed mankind in order to relieve the gods from their hard work. In the Atrahasis epic the lesser gods, whose duties were to dig canals (including the Tigris and Euphrates rivers), were revolting and the higher gods called on Nintu the mother goddess to create humans. “Create a human being, that he bear the yoke.” The lesser god Aw-ilu is killed and from a mixture of his flesh, blood, and clay, Nintu forms seven men and seven women, after the lesser gods spat on the clay. The Sumerian Enki and Ninmah (text here) depicts mankind as being formed from clay to relieve the gods of their hard work. The gods were also digging canals. This is similar to the Atraharsis account. Regarding mankind,the god Enki told his mother, Namma: “Impose on him the work of carrying baskets. You should knead clay from the top of the abzu; the birth-goddesses (?) will nip off the clay and you shall bring the form into existence.” The Sumerian mythology influenced that of Mesopotamia and thus such close correlations are not unexpected. In the Genesis narrative, mankind is not created in order to relieve God of menial labour. Instead of making mankind for the needs of God, God provides for all their needs. It is interesting to note that the word nepesh, which is used for the breath God breathed into Adam, is also used to refer to the living creatures of creation in Genesis 1: 24. The difference comes in the personal, intimate way that God breathed the breath into Adam, which Robert Davidson describes as “J’s way of indicating that peculiar relationship between God and man which the creation hymn described in terms of ‘image and ‘likeness’.” The next post will investigate the Fall narrative.

Keel, O. 1978. The symbolism of the biblical world: Ancient near eastern iconography and the book of Psalms. London: SPCK.