This is the fifth installment in the series regarding arguments leveled against evolution and the second one regarding transitional forms. In the previous post we looked at the transition from fish to amphibian and reptile, also called Romer’s Gap. Now we turn to the feathered dinosaurs, when dinosaurs became more bird-like.

Perhaps the most famous transitional fossil is that of Archaeopteryx lithographica, found in 1861 in Germany. This means it was discovered in time for Darwin to include it in new editions of the Origin. Thomas Huxley deducted from Archaeopteryx that birds were descended from dinosaurs and later fossil discoveries confirmed his conclusion. It seems, however, that Archaeopteryx was a side-branch and not part of the actual lineage linking reptiles and birds. Archaeopteryx lived during the Jurassic period, about 150 million years ago, yet it is only one of several transitional forms. Other links between dinosaurs and birds include: 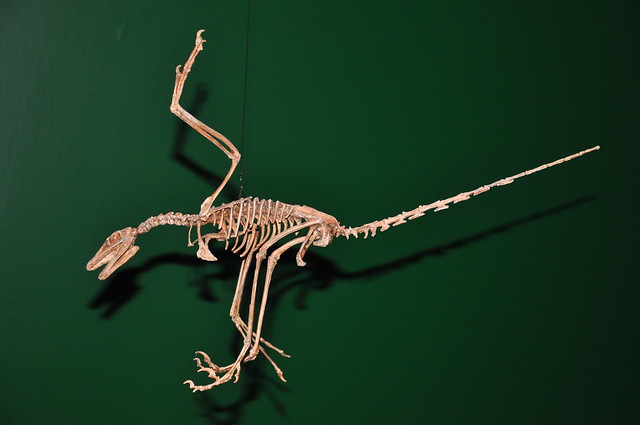 In the next blog post things get closer to home as we look at the transitional forms in our own lineage.

Missing links and a look at the Romer’s gap

The term “missing link” was coined in Darwin’s time and was used to denote the “hypothetical organisms that linked different groups, and especially humans with anthropoid apes.” Perhaps the most famous “missing links” are those linking humans to our more ape-like ancestors. The term “missing link” is misleading, however, because it supposes that all creatures are linked in a hierarchy or Chain of Being when the case is rather that all creatures share common ancestors. The term also implies that there are certain links that are missing and thus disprove the theory of evolution. Modern scientists speak of transitional forms instead of “missing links.”

Keith B. Miller addresses two errors with regard to the fossil record and missing links: “There are two opposite errors that need to be countered about the fossil record: (1) that it is so incomplete as to be of no value in interpreting patterns and trends in the history of life, and (2) that it is so good that we should expect a relatively complete record of the details of evolutionary transitions within most or all lineages.”

David H. Bailey states that many of the gaps pointed out by creationists have been filled over the past few decades. Dawkins states that “for a large number of fossils, a good cause can be made that every one of them is an intermediate between something and something else.” It is true that there are gaps in the fossil record, but that is exactly what one would expect if one takes into consideration the difficult process of fossilization and the amount of strata which have been excavated. A rare occurrence known as fossil Lagerstätten took place where one encounters thick layers of fossil-rich rock. These are very rare indeed. Organisms that lack hard parts (eg. Ediacaran organisms, sponges, plants) have very little hope to be fossilized and even when an organism has hard parts, dissolution and recrystallization could erase any traces of fossilization. Erosion and changes in the formation of rock can also destroy fossil evidence. Terrestrial organisms are less likely to be fossilized than those in aquatic environments, because sediments in water increase the chances of fossilization. Even when there are fossil-rich layers, these may be situated in inaccessible places, e.g. on the bottom of the sea or in the subsurface. Long-lived and abundant species stand a bigger chance of being preserved in the fossil record than short-lived or scarce species. For example, a fossil impala would be more probable than a fossil aardvark. As Charles Darwin stated: “The crust of the earth is a vast museum; but the natural collections have been imperfectly made, and only at long intervals of time.”

Miller, K B 2003. Common descent, transitional forms, and the fossil record, in Miller, K B (ed.) Perspectives on an evolving creation. Grand Rapids: William B Eerdmans.152-181.