A certain petition has been making waves in the local metal community. It was posted by the vaguely named Christians SA, which turned out to be a certain C Nielsen, frontman of Because of Betrayal. View the petition here. Shots were fired and memes were made. 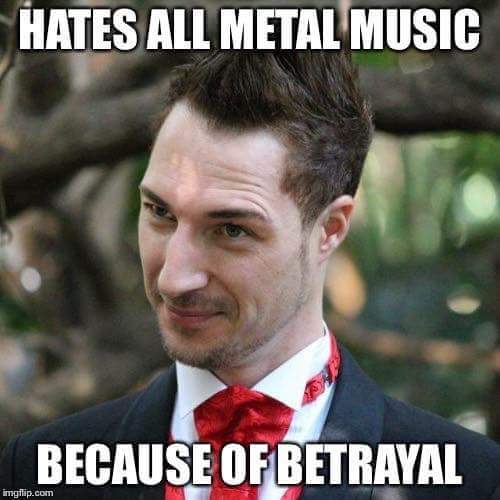 Falling under the general term of Christian myself, I think the petition is misguided and counterproductive.

People are freaking out about bands turning young people into satanists. A normal human being should be perfectly able to encounter different opinions without being swayed by all of them. Imagine you’re walking in a mall and see a poster about Colgate toothpaste. Immediately you think that Colgate is the best toothpaste ever. A few minutes later you see a poster for Aquafresh. Immediately you are convinced that Aquafresh is the best toothpaste ever. You decide to grab a quick snack and hear someone talking about veganism. Immediately you decide that veganism is the be all and end all of food and diet. Does that sound ridiculous? It;s because it is. Frankly, if you think that a band can change your child’s entire point of view then you should’ve raised them better.

The petition states the following: “This “right” which they label as “Freedom of Speech” and “Constitutional Law” and the uprising in Record Labels/Event Companies completely undermines the majority and ethical values our “fair” nation stands for and abolishes the Christian values our forefathers and leaders took generations to build to create Freedom in SA.” Chapter 2 point 15 (1)  of the Bill of Rights states that “Everyone has the right to freedom of conscience, religion, thought, belief and opinion.” Point 16 states that:

(1) Everyone has the right to freedom of expression, which includes— (a) freedom of the press and other media; (b) freedom to receive or impart information or ideas; (c) freedom of artistic creativity; and (d) academic freedom and freedom of scientific research. (2) The right in subsection (1) does not extend to—(a) propaganda for war; (b) incitement of imminent violence; or (c) advocacy of hatred that is based on race, ethnicity, gender or religion, and that constitutes incitement to cause harm.

The last point would be the only one that a petition like this could possibly stand on when it comes to bands playing here. Point 17 (1) states that “Everyone has the right, peacefully and unarmed, to assemble, to demonstrate, to picket and to present petitions.” Now that’s fine and good, but then one should also respect the rights mentioned in points 15 and 16. Fundamentalists are not known for being consistent, though (e.g. using OT text to state that homosexuals deserve death, but ignoring OT texts about eating pork).

South Africa is not a Christian country. It is a secular state. If Christians want to have freedom to practice their religion then they have to grant others their freedom as well. This petition and the desire to oppose freedom of religion and expression are harmful to not only those who would be censured, but also to the Christians of the country. It sparks unnecessary antagonism from those upon who this petition is imposed, as well as those Christians who are not of the militant and/or fundamentalist type. I don’t think a Christian state is a good idea in any case. That’s how abominations like the Crusades and witch hunts happen.

Some of the signatures are worried about these bands polluting our high moral code. I’m not sure what country they are living in, but it certainly isn’t South Africa in 2016. While it is true that 80% of SA citizens claim they are Christian, I suspect that many if not most are what are called nominal Christians. Nominal Christians are those who would, when asked about it, answer that they are Christian in their beliefs. They might even go to church, but that is where it stops. If our country were 80% full of Christians who were serious about the faith they believed in, we wouldn’t be struggling with corruption or such an appalling crime rate. It’s easier to point the finger to a perceived outside danger. The real issue facing Christianity in SA is not a band or two playing metal, but the Christians themselves who do not practice what they preach. Rather look to yourselves and change who you are first.