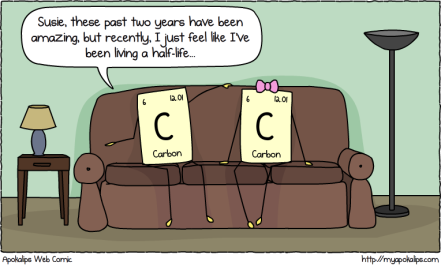 Old earth creationists are more accepting of radiometric dating and its findings, but young earth creationists reject the technique. Robert T. Pennock states that “young-earthers still try to argue that the radioisotope data cannot be trusted, suggesting that rates of decay were not constant but had accelerated at times, thus skewing the data so the earth appears to be much older.”

Cotner and Moore write the following:

Andrew Snelling of the antievolution organization Answers in Genesis claims that radiometric dating is inaccurate because it contradicts the Bible and because “we now have impeccable evidence that radioactive decay rates were greatly sped up at some point during the past, for example, during the global catastrophic Genesis Flood.” This alleged evidence has never been published in a peer-reviewed scientific journal. Just as there is no evidence for a global flood, so too is there no evidence that rates of radiometric decay have changed significantly over time, nor is there any evidence that the laws of physics change during floods.

Radiometric dating works with the rate at which radioactive elements and isotopes decay. Isotopes are atoms of the same element that contain a different number of neutrons in the nucleus. The element is defined by the number of protons present in the nucleus. Carbon has six protons and six neutrons, Carbon-12 has six protons and 12 neutrons. The half-life is the amount of time it takes for half of the atoms to decay. Radiometric dating is useful in dating the igneous rocks that are found between layers of sedimentary rock, because only volcanic rock can be dated with this method.

Stanley Rice provides two ways in which isotopes are useful in evolutionary science:

Cotner & Moore explain that “[r]adioactive decay is exponential, meaning that the rate of decay does not involve fixed amounts of atoms, but instead involves fixed proportions of atoms. After one half-life, half of the original radioactive atoms are present. This rate remains constant regardless of how many atoms have already decayed.” The technique was proposed by Ernest Rutherford in 1905. 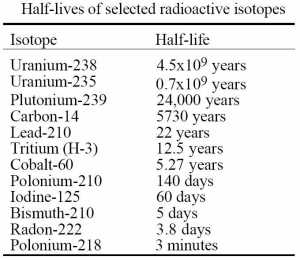 Uranium-lead dating is a type of radiometric dating that is used on zircon crystals and works on the ratio of uranium-238 atoms that have decayed into lead-206, or uranium-235 to lead-207 atoms. Clair Patterson developed the uranium-lead method in 1948.

Potassium-argon dating is another kind of radioactive dating. Potassium-40 decays into argon-40. Potassium-containing minerals are tested to find the amount of argon-40 and then to calculate the time that has passed since the mineral cooled to about 300 degrees. Potassium-argon dating can be used on materials such as mica, feldspar, and other minerals. The decay of rubidium-87 into strontium-87 can also be used for dating.

The radiocarbon method is the method for organic materials and was developed by Willard Libby in 1947. Cosmic radiation causes a small percentage of the nitrogen in the atmosphere to be transformed into carbon-14 atoms. Some of these carbon-14 atoms are absorbed by plants during photosynthesis. When the plant dies, photosynthesis stops and the ratio between radioactive and stable carbon atoms begins to decrease. This ratio can then be measured to determine the time that has passed since the death of the plant.

Another type of radiometric dating is called fission-track dating and is based on the tracks made in volcanic rock by the decay of uranium-238, which decays into lead.

John Philips was the first to use strata to date sediments. William Smith, in 1796, realized that there are fossils that are specific to each stratum and constructed geological maps according to the fossil species found in each stratum. His findings helped to establish the science of biostratigraphy. Georges Cuvier, a famous anatomist, made the following remark in 1801: “the older the beds in which [fossils] are found, the more they differ from those of animals that we know today. [This is] the most remarkable and astonishing result that I have obtained from my research.” Darwin himself wrote that “a discerning eye might have seen that some form or other of the doctrine of transmutation was inevitable, from the time when the truth enunciated by William Smith that successive strata are characterised by different kinds of fossil remains, became a firmly established law of nature.”

Over time, geologists have developed a standard column illustrating the different layers and when they were laid down (like a map of strata). Fossils are then dated relative to the layers in which they were found. Hurd explains that “[b]iostratigraphic dating rests on the fact that certain extinct ancestor of the modern horse, cow, or elephant always appear in specific locations in the standard geographical column.” Anachronistic fossils have never been found. 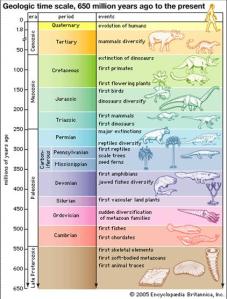 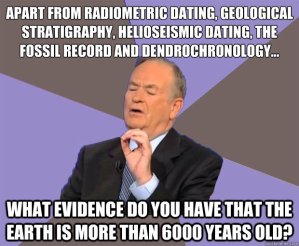